Anthony Terrell Smith (born March 3, 1966), better known by his stage name Tone Lōc, is an American rapper, actor, and producer. He is known for his raspy voice, his hit songs "Wild Thing" and "Funky Cold Medina", for which he was nominated for a Grammy Award, and for being featured in "We're All in the Same Gang", a collaborative single by the West Coast Rap All-Stars.

Ernest Roscoe Dickerson (born June 25, 1951) is an American director, cinematographer, and screenwriter of film, television, and music videos. As a cinematographer, he is known for his frequent collaborations with Spike Lee ever since they were classmates at the Tisch School of the Arts and worked together on Lee's 1983 master's degree thesis student film, Joe's Bed-Stuy Barbershop: We Cut Heads, which ultimately won a Student Academy Award. As a director, he is known for action and horror films such as Juice, Demon Knight, Bulletproof, Bones and Never Die Alone. He has also directed several episodes of acclaimed television series, including Once Upon a Time, The Wire, Dexter, The Walking Dead, and Godfather of Harlem. 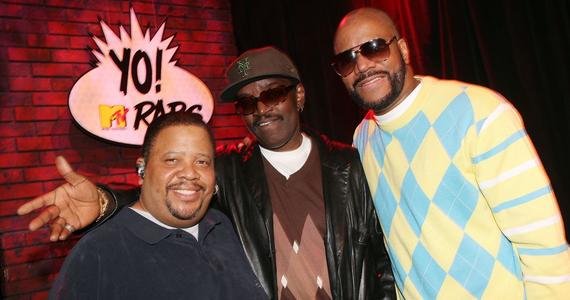 The Arsenio Hall Show is an American syndicated late-night talk show created by and starring comedian Arsenio Hall. There have been two different incarnations of The Arsenio Hall Show. The original series premiered on January 3, 1989, and ran until May 27, 1994. Nineteen years after the original series ended, Hall returned for a revival. It premiered on September 9, 2013, and was cancelled after one season, with the finale airing on May 21, 2014.

Bokeem Woodbine (born April 13, 1973) is an American actor. In 1994 he portrayed Joshua, Jason's troubled brother, in Jason's Lyric. He won a Black Reel Award, and was nominated for a Primetime Emmy Award and a Critics' Choice Television Award for his role as Kansas City enforcer Mike Milligan in the second season of Fargo. Woodbine also portrayed Daniel in season 2 of the WGN series Underground and Herman Schultz/Shocker in the film Spider-Man: Homecoming.

In 1996 he appeared in Shakur's music video for "I Ain't Mad at Cha" and formed a friendship with the rapper. They subsequently reunited in Vondie Curtis-Hall's directorial debut, Gridlock'd, which was released four months after Shakur's death. In 1999 Woodbine appeared in an episode of HBO's The Sopranos as New Jersey Gangster rapper Massive Genius.

Sherwin David "Wood" Harris (born October 17, 1969) is an American actor. He has portrayed the drug kingpin Avon Barksdale on the HBO crime drama The Wire, cocaine dealer Ace in Paid in Full and high school football player Julius Campbell in the 2000 film Remember the Titans. He is also known for playing Brooke Payne on the BET miniseries The New Edition Story in 2017. From 2016 to 2017, he played Barry Fouray on VH1 miniseries The Breaks.

Harris portrayed Damon Cross on the Fox series Empire for its fifth and final sixth season. While enrolled in NIU, Harris starred in his first major film role in the basketball drama Above the Rim, opposite Duane Martin and co-starring Tupac Shakur, and appeared in many theatrical stage productions of various off-Broadway plays. 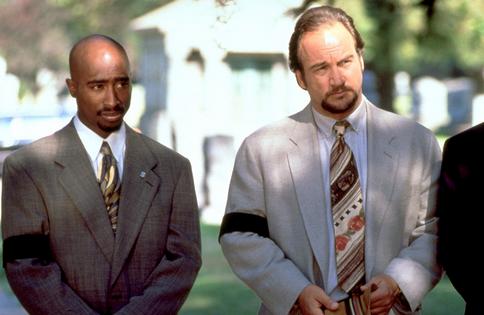 Michael Kenneth Williams (November 22, 1966 – September 6, 2021) was an American actor. He rose to fame in 2002 through his critically acclaimed role as Omar Little on the HBO drama series The Wire. He has been described as a "singular presence, onscreen and off, who made every role his own.”

Born in Brooklyn, New York City, to a South Carolinian father and a Bahamian mother, Williams enrolled at the National Black Theater. He left school early to pursue a career as a dancer, which resulted in him working with Kym Sims, George Michael and Madonna, and found work choreographing music videos. His distinctive voice, prominent facial scar and charisma helped him attain acting work, initially alongside Tupac Shakur in the 1996 film Bullet before being cast in The Wire in 2002. The role was widely acclaimed, leading to praise from President Barack Obama and an NAACP Image Award for Outstanding Actor in a Drama Series in 2007. 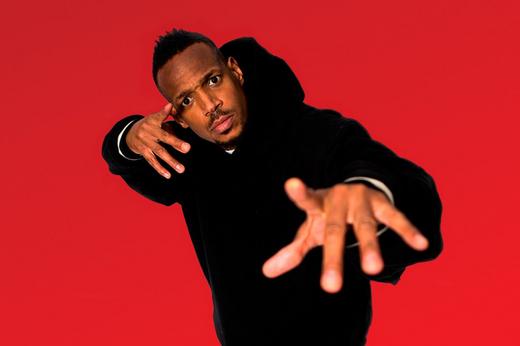 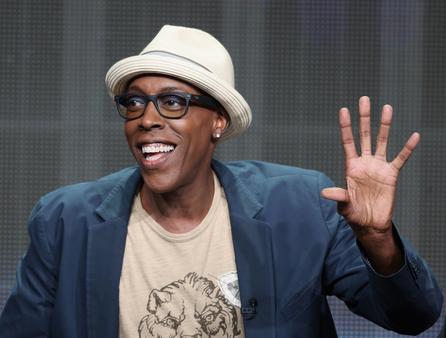 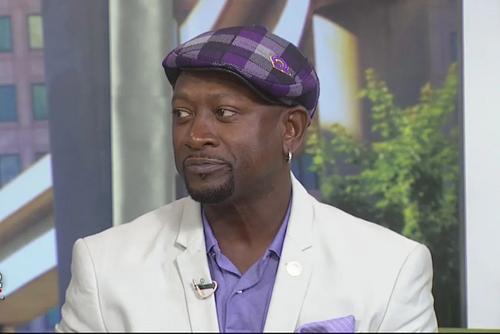 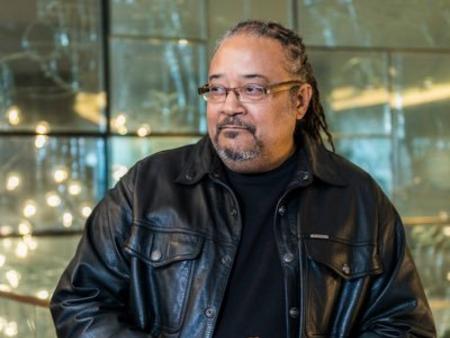 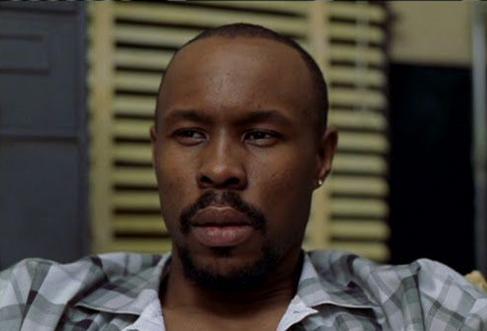 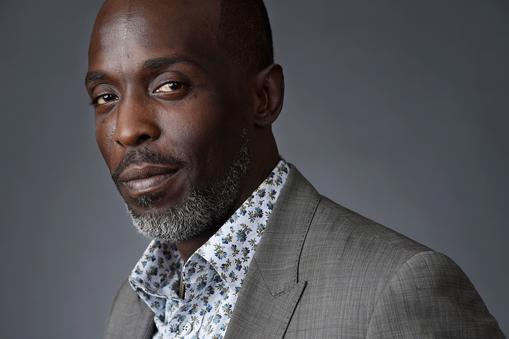 Tony Danza (born Anthony Salvatore Iadanza; April 21, 1951) is an American actor who starred on the TV series Taxi and Who's the Boss?, for which he was nominated for an Emmy Award and four Golden Globe Awards. In 1998, Danza won the People's Choice Award for Favorite Male Performer in a New Television Series for his work on the 1997 sitcom The Tony Danza Show (not to be confused with his 2004–2006 daytime variety talk show of the same name). He has also appeared in films such as Don Jon, Angels in the Outfield, The Hollywood Knights, Going Ape! and Crash. So, Apparently, Tupac Shakur Loved Tony Danza, 'Considered Him a Friend' By Eliot Glazer. These are actual words Tupac Shakur said about Tony Danza (who confirmed their bromance to Rosie O'Donnell)

Khalil Kain (born on November 22, 1964) is an American actor, film producer and rapper best known for his role as Raheem Porter in the 1992 crime thriller film Juice and as the second Darnell Wilkes on the UPN/CW sitcom Girlfriends (2001–2008). He is also known for his role as Patrick Peet in the 2001 horror film Bones.

Fred Brathwaite (born August 31, 1959), more popularly known as Fab 5 Freddy, is an American visual artist, filmmaker, and hip hop pioneer. He is considered one of the architects of the street art movement. Freddy emerged in New York's downtown underground creative scene in the late 1970s as a graffiti artist. He was the bridge between the burgeoning uptown rap scene and the downtown No Wave art scene. He was immortalized in 1981 when Debbie Harry rapped on the Blondie song "Rapture" that "Fab 5 Freddy told me everybody's fly." In the late 1980s, Freddy became the first host of the groundbreaking hip-hop music video show Yo! MTV Raps. 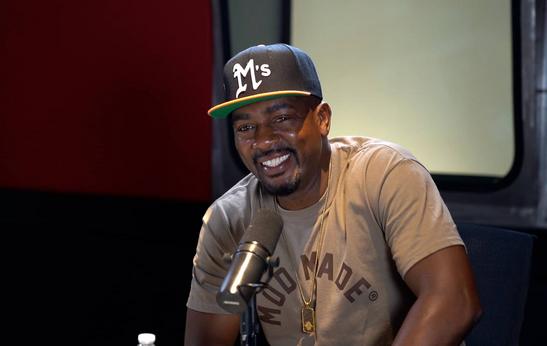 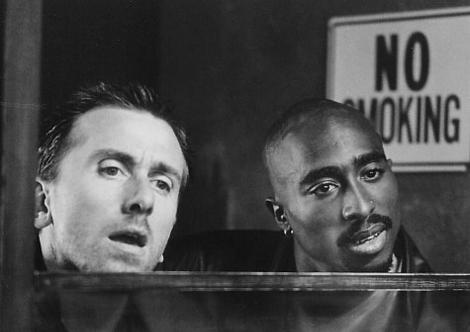 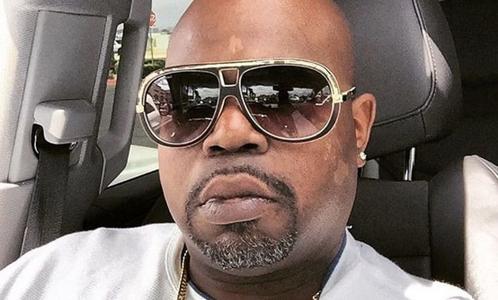 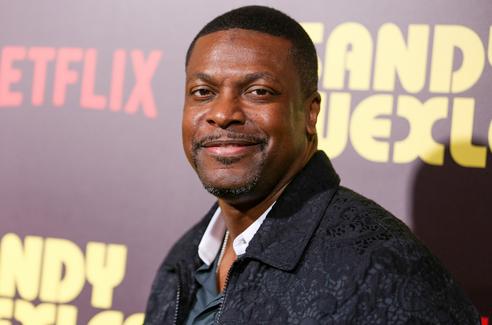 He is the younger brother of late comic actor John Belushi and the father of actor Robert Belushi. Every time I watch the sunrise, I think of Tupac," Belushi tweeted. "We once watched the sunrise together after a long night. It was quiet for a second then he looked at me and said 'I'm a thug, I prefer the sunrise. ' I really don't know what that means, but I still live by it to this day." 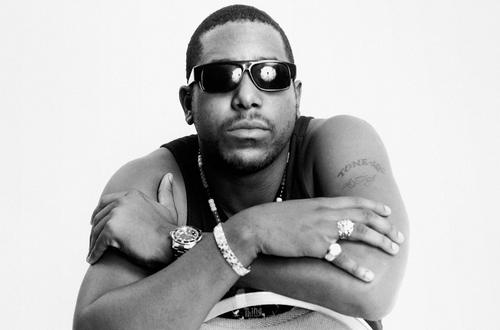 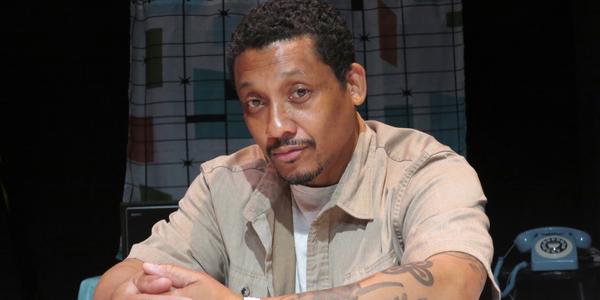 Philip Andre "Mickey" Rourke (born September 16, 1952) is an American actor and former boxer who has appeared primarily as a leading man in drama, action, and thriller films.During the 1980s, Rourke starred in the comedy-drama Diner (1982), the drama Rumble Fish (1983), the crime-black-comedy film The Pope of Greenwich Village (1984), and the erotic drama 9½ Weeks (1986). He received critical praise for his work in the Charles Bukowski biopic Barfly and the horror mystery Angel Heart (both 1987). In 1991, Rourke teamed up with Don Johnson and Tom Sizemore in the cult classic action film Harley Davidson and the Marlboro Man; also in 1991, Rourke—who trained as a boxer in his early years—left acting and became a professional boxer for a time.

Christopher Tucker (born August 31, 1971) is an American comedian and actor. Tucker made his debut in 1992 as a stand-up performer on the HBO comedy series Def Comedy Jam, frequently appearing on the show during the 1990s. He appeared in the films Friday, The Fifth Element, Money Talks, and Jackie Brown, and later gained fame for playing Detective James Carter in the Rush Hour series, for which he received several accolades. Chris Tucker appeared in the California Love music video. 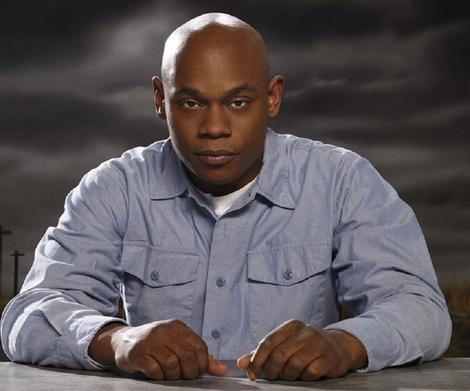 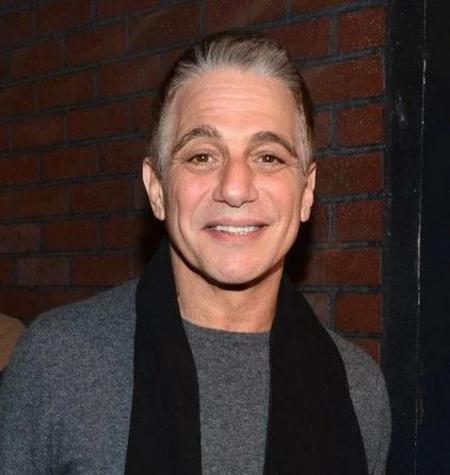 Joseph Pierre Torry (born September 28, 1965) is an American actor and comedian. orry began his acting career around the age of 23. He brought his own style of humor to such roles in films such as, Strictly Business and House Party . He also made guest appearances on television shows including ER, NYPD Blue, Girlfriends, NCIS, The Conan O'Brien Show, Jon Stewart, The Bryon Allen Show before portraying Damon King on The Jamie Foxx Show replacing his brother Guy Torry a couple of times and became a crowd favorite on Def Comedy Jam. Appearing on earlier shows such as Roc and Amen jump started his television roles.

It wasn't until 1992 when Torry would receive his big break, he was given the job of hosting Def Comedy Jam after host Martin Lawrence left the show, further enlarging his exposure in the entertainment industry. This also brought Torry larger roles in newer movies. He starred in Motives 1 & 2, Lock Down, Hair Show, Mannsfield 12, Poetic Justice, Sprung, and Tales from the Hood among others.

Bill Bellamy (born April 7, 1965) is an American actor and stand-up comedian. Bellamy first gained national notoriety on HBO's Russell Simmons' Def Comedy Jam, where he is credited for creating or coining the phrase "booty call", described as a late night call to a potential paramour with the intention of meeting strictly for sex. Bellamy was born in Newark, New Jersey. Bellamy is a cousin of basketball player Shaquille O'Neal.

For many years, Bellamy was a staple on MTV, a VJ and the host of several MTV programs including MTV Jamz and MTV Beach House. He went on to star in a number of movies, including Fled, Love Jones, The Brothers, How to Be a Player, Getting Played and Any Given Sunday. He also appeared on two episodes of the TV show Kenan and Kel. Additionally, he voiced Skeeter on the Nickelodeon television show Cousin Skeeter.

Yo! MTV Raps is an American two-hour television music video program, which first aired on MTV Europe from 1987 to mid-90s and on MTV US from August 1988 to August 1995. The U.S. version was originally hosted by Fab 5 Freddy. Later, the show's main host was Doctor Dré and Demme's high school friend, Ed Lover who both hosted together on weekdays. Soon they were joined by Doctor Dre's Original Concept group member T Money. Fab 5 Freddy proceeded to host on weekends. The original line-up of the show, starring only Fab as the host, premiered on MTV on August 6, 1988.

Omar Hashim Epps (born July 20, 1973) is an American actor, rapper, and producer. He has been awarded nine NAACP Image Awards, two Teen Choice Awards, one MTV Movie Award, one Black Reel Award, and one Screen Actors Guild Award. Epps's film roles include Juice, Higher Learning, The Wood, In Too Deep, and Love & Basketball. His television work includes the role of Dr. Dennis Gant on the medical drama series ER, J. Martin Bellamy in Resurrection, Dr. Eric Foreman on the Fox medical drama series House from 2004 to 2012, and Isaac Johnson in the TV series Shooter from 2016 to 2018. 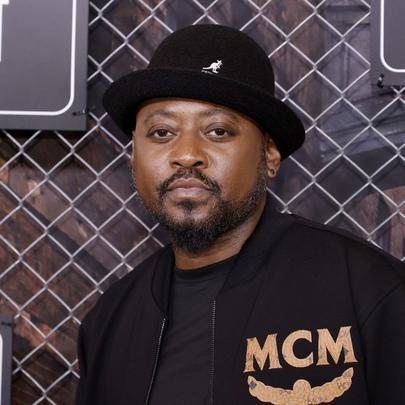 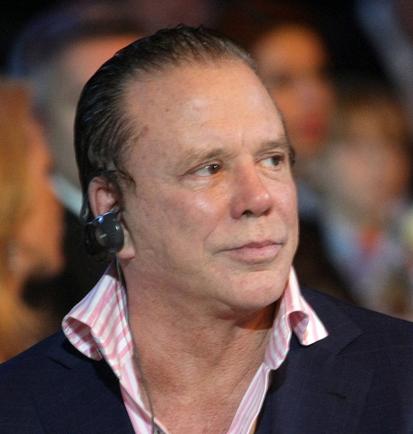 Timothy Simon Roth (born 14 May 1961) is an English actor. He began acting on films and television series in the 1980s. He was among a group of prominent British actors of the era, the "Brit Pack".

He made his television debut in Made in Britain (1982), and theatrical film debut in The Hit (1984), for which he was nominated for the BAFTA Award for Most Promising Newcomer. Since then, he gained more attention for his roles in films, including The Cook, the Thief, His Wife & Her Lover, (1989), Vincent & Theo (1990), and Rosencrantz & Guildenstern Are Dead (1990). Roth collaborated with Quentin Tarantino on several films, such as Reservoir Dogs (1992), Pulp Fiction (1994), Four Rooms (1995), and The Hateful Eight (2015). For his performance in Rob Roy (1995), Roth won the BAFTA Award for Best Actor in a Supporting Role, and was nominated for a Golden Globe Award for Best Supporting Actor – Motion Picture and the Academy Award for Best Supporting Actor.

Roth made his directorial debut with the film The War Zone (1999). He played Cal Lightman in the Fox series Lie to Me (2009–2011) and Jim Worth / Jack Devlin in the Sky Atlantic series Tin Star (2017–2020). Roth also portrayed Emil Blonsky / Abomination in the Marvel Cinematic Universe films The Incredible Hulk (2008) and Shang-Chi and the Legend of the Ten Rings (2021), and will reprise the role in the Disney+ series She-Hulk: Attorney at Law (2022).