The Black Panthers, also known as the Black Panther Party, was a political organization founded in 1966 by Huey Newton and Bobby Seale to challenge police brutality against the African American community.

The organization later declined as a result of internal tensions, deadly shootouts and FBI counterintelligence activities aimed at weakening the organization. 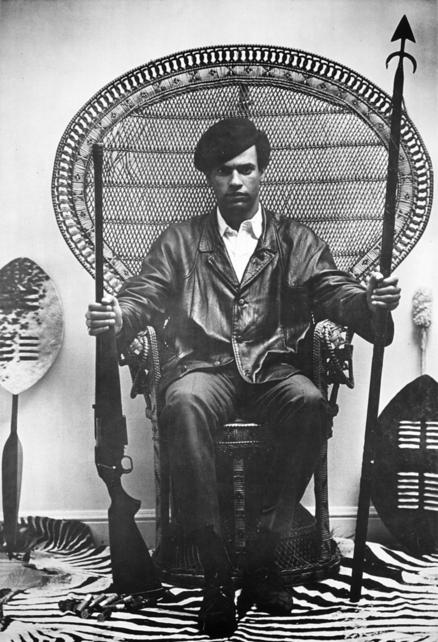 In the early hours of August 22, 1989, Newton was murdered in front of 1456 9th Street, near the corner of Center Street in the Lower Bottoms section of West Oakland, California. Within days, Tyrone Robinson was arrested as a suspect; he was on parole and admitted the murder to police, claiming self-defense — though police found no evidence that Newton was carrying a gun. In 1991, Robinson was convicted of first-degree murder and sentenced to a prison term of 32 years to life. Robinson stated that his motive was to advance in the WatBlack Guerrilla Family, a Marxist–Leninist narcotics prison gang, in order to get a crack franchise.

Newton's funeral was held at Allen Temple Baptist Church, where he attended following his conversion. Some 1,300 mourners were accommodated inside, and another 500 to 600 listened to the service from outside. Newton's achievements in civil rights and work on behalf of Black children and families with the Black Panther Party were celebrated. Newton's body was cremated, and his ashes were interred at Evergreen Cemetery in Oakland. Thanks to the efforts of his wife Fredrika Newton, on February 17, 2021, in commemoration of the Black Panther Party the city of Oakland erected a statute of Dr. Huey P Newton in the corner where he was murdered. That same year, that corner street adopted his name in what it is now called Dr. Huey P. Newton Way.

They both protested the college’s “Pioneer Day” celebration, which honored the pioneers who came to California in the 1800s, but omitted the role of African Americans in settling the American West. Seale and Newton formed the Negro History Fact Group, which called on the school to offer classes in Black history.

They founded the Black Panthers in the wake of the assassination of Black nationalist Malcolm X and after police in San Francisco shot and killed an unarmed Black teen named Matthew Johnson. Originally dubbed the Black Panther Party for Self-Defense, the organization was founded in October 1966. The Black Panthers’ early activities primarily involved monitoring police activities in Black communities in Oakland and other cities.

As they instituted a number of social programs and engaged in political activities, their popularity grew. The Black Panthers drew widespread support from urban centers with large minority communities, including Los Angeles, Chicago, New York and Philadelphia. By 1968, the Black Panthers had roughly 2,000 members across the country.


Political Activities And Social Programs
Newton and Seale drew on Marxist ideology for the party platform. They outlined the organization’s philosophical views and political objectives in a Ten-Point Program. The Ten-Point Program called for an immediate end to police brutality; employment for African Americans; and land, housing and justice for all. The Black Panthers were part of the larger Black Power movement, which emphasized Black pride, community control and unification for civil rights.

While the Black Panthers were often portrayed as a gang, their leadership saw the organization as a political party whose goal was getting more African Americans elected to political office. They were unsuccessful on this front. By the early 1970s, FBI counterintelligence efforts, criminal activities and an internal rift between group members weakened the party as a political force. The Black Panthers did, however, start a number of popular community social programs, including free breakfast programs for school children and free health clinics in 13 African American communities across the United States.

Black Panthers Violence And Controversies
The Black Panthers were involved in numerous violent encounters with police. In 1967, founder Huey Newton allegedly killed Oakland police officer John Frey. Newton was convicted of voluntary manslaughter in 1968 and was sentenced to two to 15 years in prison. An appellate court decision later reversed the conviction. Eldridge Cleaver, editor of the Black Panther’s newspaper, and 17-year old Black Panther member and treasurer Bobby Hutton, were involved in a shootout with police in 1968 that left Hutton dead and two police officers wounded.

Conflicts within the party often turned violent too. In 1969, Black Panther Party member Alex Rackley was tortured and murdered by other Black Panthers who thought he was a police informant. Black Panther bookkeeper Betty Van Patter was found beaten and murdered in 1974. No one was charged with the death, though many believed that party leadership was responsible.

On April 2, 1969 twenty-one Black Panther members were indicted. The number dropped from twenty-one to thirteen, who were arraigned before Judge Charles Marks with bail set at $100,000. The defendants could not make bail immediately and so many spent the months detained on Rikers Island. Joseph A. Phillips from the District Attorney's Office led the prosecution, with Jeffrey Weinsten as his assistant. The Panthers were charged with conspiracy to kill several police officers and to destroy a number of buildings, including four police stations, five department stores, and the Bronx Botanical Gardens.

At the time, the eight-month trial was the longest and most expensive in New York State history.

Afeni Shakur chose to represent herself in court, pregnant while on trial and facing a 300-year prison sentence and had not attended law school. Shakur interviewed witnesses and argued in court.

One of the people Shakur cross-examined was Ralph White, one of the three suspects that actually was an undercover agent. White was someone whom she had suspected all along of being a cop, since he had been inciting others to violence. She got White to admit under oath that he and the other two agents had organized most of the unlawful activities. She also got White to admit to the court that the activism that they had done together was "powerful, inspiring, and ... beautiful". Shakur asked Mr. White if he had misrepresented the Panthers to his police bosses. He said "Yes". She asked if he had betrayed the community. He said "Yes." She and the others in the "Panther 21" were acquitted in May 1971 after an eight-month trial. Altogether, Afeni Shakur spent two years in jail before being acquitted.

The FBI And COINTELPRO
The Black Panthers’ socialist message and black nationalist focus made them the target of a secret FBI counterintelligence program called COINTELPRO. In 1969, the FBI declared the Black Panthers a communist organization and an enemy of the United States government. The first FBI’s first director, J. Edgar Hoover, in 1968 called the Black Panthers, “One of the greatest threats to the nation’s internal security.” The FBI worked to weaken the Panthers by exploited existing rivalries between black nationalist groups. They also worked to undermine and dismantle the Free Breakfast for Children Program and other community social programs instituted by the Black Panthers.

In 1969, Chicago police gunned down and killed Black Panther Party members Fred Hampton and Mark Clark, who were asleep in their apartment. About a hundred bullets were fired in what police described as a fierce gun battle with members of the Black Panther Party. However, ballistics experts later determined that only one of those bullets came from the Panthers’ side.
Although the FBI was not responsible for leading the raid, a federal grand jury later indicated that the bureau played a

significant role in the events leading up to the raid.

Fred Hampton
Fredrick Allen Hampton Sr. (August 30, 1948 – December 4, 1969) was an American activist. He came to prominence in Chicago as deputy chairman of the national Black Panther Party, and chair of the Illinois chapter. As a progressive African American, he founded the antiracist, anticlass Rainbow Coalition, a prominent multicultural political organization that initially included the Black Panthers, Young Patriots (which organized poor whites), and the Young Lords (which organized Hispanics), and an alliance among major Chicago street gangs to help them end infighting and work for social change. A Marxist–Leninist, Hampton considered fascism the greatest threat, saying, "nothing is more important than stopping fascism, because fascism will stop us all."

In 1967, the Federal Bureau of Investigation (FBI) identified Hampton as a radical threat. It tried to subvert his activities in Chicago, sowing disinformation among black progressive groups and placing a counterintelligence operative in the local Panthers organization. In December 1969, Hampton was drugged, shot and killed in his bed during a predawn raid at his Chicago apartment by a tactical unit of the Cook County State's Attorney's Office, who received aid from the Chicago Police Department and the FBI leading up to the attack. Law enforcement sprayed more than 90 gunshots throughout the apartment; the occupants fired once. During the raid, Panther Mark Clark was also killed and several others were seriously wounded.

In January 1970, the Cook County Coroner held an inquest; the jury concluded that Hampton's and Clark's deaths were justifiable homicides. A civil lawsuit was later filed on behalf of the survivors and the relatives of Hampton and Clark. It was resolved in 1982 by a settlement of $1.85 million (equivalent to $5.19 million in 2021); the City of Chicago, Cook County, and the federal government each paid one-third to a group of nine plaintiffs. Given revelations about the illegal COINTELPRO program and documents associated with the killings, many scholars now consider Hampton's death an assassination at the FBI's initiative. 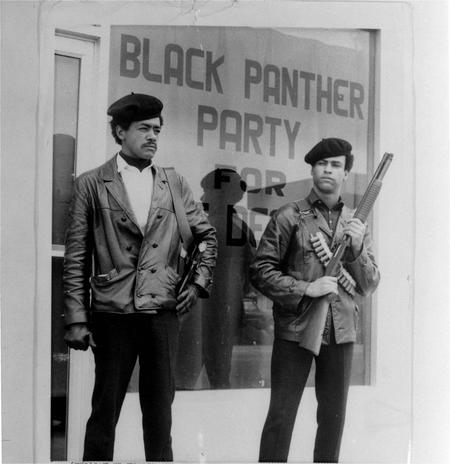