Outlawz are an American hip hop group founded by rapper Tupac Shakur after Shakur's release from prison. Collectively, they were best known for their association with Shakur. Most of the group members are named after political figures.

In the earlier years of the Outlawz, some of the members were originally in a group known as Thoroheadz. They first appeared on the B-side of Tupac Shakur's 1993 single "Holler If Ya Hear Me", on the track "Flex". Then the following year they was featured on the song Runnin From The Police. A leftover track from the thug life album that appeared on the Million Man Strong Soundtrack in 1995.

By the year of 1994 Mutah got connected with his childhood friend Yaki Kadafi. Kadafi mother Yaasmyn Fula introduced him to Tupac. The group then became the Young Thugz and started recording songs for Me Against The World. The Young Thugz was composed of K-Dog (Kastro), Young Hollywood (Yaki Kadafi), Mutah (Napoleon), and Big Malcolm (E.D.I. Mean). After Tupac got shot and incarcerated for the sexual assault case the group went by the name Dramacydal in 95. Fula also teamed up with fellow Outlawz member Hussein Fatal to record material under the name "Fatal-N-Felony".

When 2Pac signed to Death Row upon his release from prison, he recruited his stepbrother, Mopreme Shakur, and Big Syke from Thug Life. Hussein Fatal, Napoleon, E.D.I. Mean, Kastro, Yaki Kadafi, and Storm (the only female Outlaw) were also added. Together they formed the original lineup of the Outlaw Immortalz that debuted on 2Pac's multi-platinum smash hit album All Eyez on Me. They later dropped the title of "Immortalz" and moved on as the "Outlawz".

When Tupac Shakur recorded "Hit 'Em Up", a diss track beamed towards his former friend and rival The Notorious B.I.G, Puff Daddy, and Lil' Kim, he recruited three members from the group he had previously worked with, eager to work with them again. Together with New Jersey rappers and other associates they formed the original lineup of the Outlawz. Young Noble was later added and appeared on The Don Killuminati: The 7 Day Theory, that carried 2Pac's new stage name, Makaveli. It was on this Makaveli album that Outlawz, appearing on a few songs, first came to the greater rap community's notice.

The idea behind the group was for each member to have a rap name coinciding with the names of various leaders who resisted control by the new world order, past and present. Outlawz chose in later years to make a acronym out of the letters of their group name, "Operating Under Thug Laws As Warriorz", although it does not stand for the group's name and is used infrequently.

Heavily influenced by the various funk bands of the 1970s, Digital Underground sampled such music frequently, which became a defining element of West Coast rap. As "Rackadelic", Jacobs designed album covers and cartoon-laced liner notes, in homage to Parliament-Funkadelic album designs. Digital Underground is also notable for launching the career of member Tupac Shakur, as well as spinning off side projects and solo acts including Raw Fusion, Saafir, and singer Mystic.

Following the release of their "Doowutchyalike" single and video in the summer of 1989, the band gained popularity with their song "The Humpty Dance" in 1990. Digital Underground toured nearly every year until 2008; this consisted of live shows in Europe, Japan, Canada, Australia, and the U.S. While the group's origins lay mostly in Oakland and Berkeley, California, various characters and voices from around the U.S and U.K. appeared on the band's albums. Shock G and Money-B were the only individuals to appear on every album. Other recurring key contributors were David "DJ Fuze" Elliot, and deejay/producer Jeremy "J-Beats" Jackson, who both assisted Jacobs in developing the sound. After approximately 20 years of touring, Shock G announced that the group would officially disband in 2008. Shortly after that announcement was made, the group also confirmed that their May 2008 album ..Cuz a D.U. Party Don't Stop! would be their last studio effort.

Tupac Shakur was mainly active with Digital Underground during the years of 1990-1991. The following year in 92 Tupac was still part of Digital Underground but by that time he started to focus more on his career as a solo artist. Landing a movie in Juice coming out with his album 2Pacalypse Now and working on a movie with Janet Jackson.  Tupac stated in a interview with Tabitha Soren "I look back [on my times with Shock G] with the greatest fondness. Those were like some of the best times of my life. 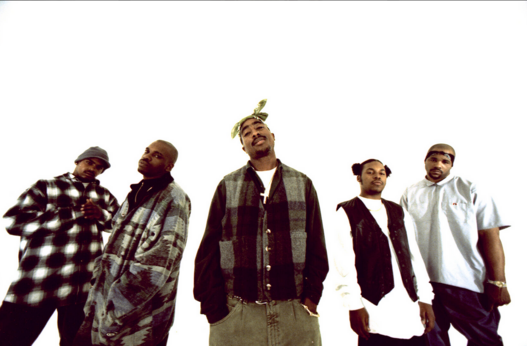 Tupac and Ryan D had a rap battle when they first met. The battle was considered a tied and from there they joined up with Klark Gable to become the One Nation Emcees. One of the first songs they recorded was Fantasy and Never Be Beat on a 808 drum machine. 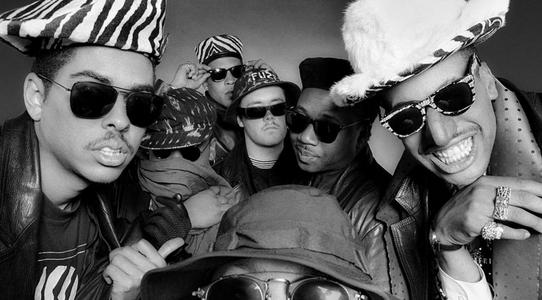 Thug Life was an American hip hop group formed by Tupac Shakur. The group that consisted of Tupac, Macadoshis, Rated R, Big Syke and Mopreme. Rated R and Mac was part of a group called Double Jeopardy when they first met Pac. The other affiliated members included Stretch, Big Serg, Man Man, Babez and many more. The Thug Life group released one album Thug Life: Volume 1 in 1994 before disbanding. The album was heavily edited and some tracks were completely removed from the final version. According to Tupac, the name originally started as an acronym: "The Hate U Give Little Infants Fucks Everybody". It represented the idea that the racism and marginalization experienced by black youth ends up negatively affecting society.

One of the first thug life songs was a track titled "Thug Life" featuring Big Syke and Prince Ital Joe produced by Johnny J. Richie Rich, Spice 1, Biggie Smalls also appeared on the initial Thug Life album but due to heavy criticism of gangsta rap at the time, the original version of the album was scrapped and re-recorded with many of the original songs being cut. The album only contains ten tracks because Interscope Records felt many of the other recorded songs were too controversial to release. It has been said that 2Pac created two other versions of this album, with many of the songs still remaining unreleased. 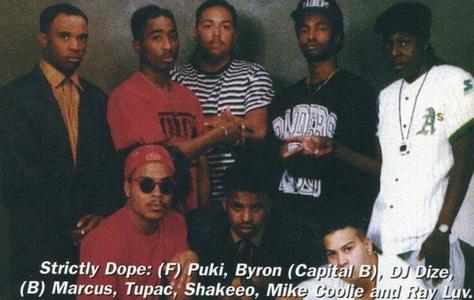 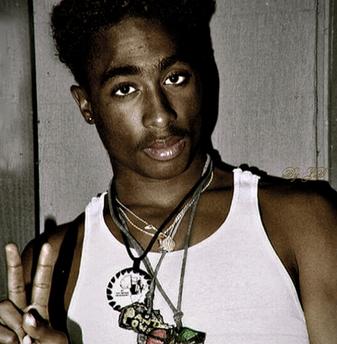 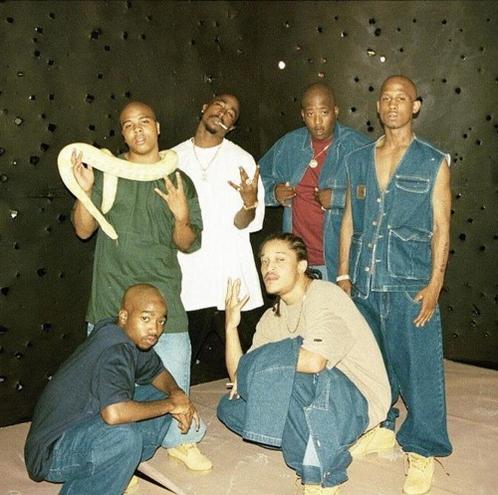 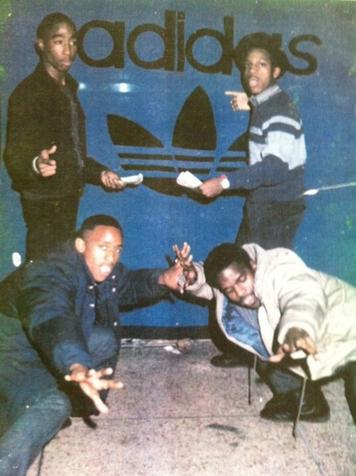 In 1989 Tupac met Ray Luv in Santa Rosa, CA and with a mutual friend named DJ Dize (Dizz-ee), they started a rap group called Strictly Dope. Their recordings were later released in 2001 under the name Tupac Shakur: The Lost Tapes. Their neighborhood performances brought Tupac enough acclaim to land an audition with Shock G of Digital Underground.

The group consisted of Gerard Young, Darrin Keith Battsfield and Dana Mouse Smith. Darrin went by the name Ace Rocker, Dana was known as Slick D and Tupac was MC New York. The group recorded several acapella raps together. That's My Man Throwing Down, Check It Out and many others.

Tupac Shakur and Dana Mouse Smith started as the East Side Crew learning how to rap and beatbox. They would compete with each other to see who wrote the fastest and would battle other people from the neighborhood. The first song they recorded was Babies Having Babies. 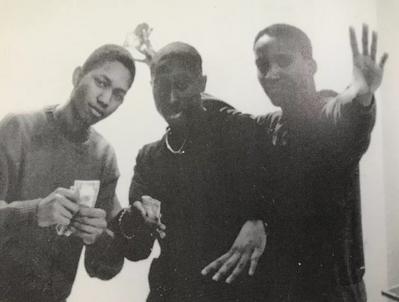